In the news this week: shocking amounts of sugar revealed in high street coffee shops, Stephen Fry left Twitter after criticism following a joke he made at the Baftas and Leonardo Di Caprio finally wins the Best Actor Bafta. There were also some exciting news features in the world of SEO and social media and we take a look at the best stories from the past week.

Twitter makes it easier for businesses to connect with customers

Perhaps one of Twitter’s strengths is as a platform for responding to customer complaints and for real time brand feedback. Now Twitter is making it easier to hold two-way communications for customer service purposes. Businesses on Twitter can now attach a “send a private message” link to their tweets letting customers respond with a direct message and start a two-way conversation.

In leaked documents it looks like Facebook is looking to introduce a way of monetising its messaging platform over the next couple of months. The leaked documents suggest that the adverts will be different to those that currently feature on the Facebook platform and will only appear in message threads where users have contacted businesses directly.

The AMP protocol for delivering fast loading pages on mobile will roll out on Google search from the 24th of February. This is likely to have the most impact on news publishers as these results will show above the normal search results in a carousel format on mobile devices. AMP is just one of the signals that Google uses to rank websites and AMP pages will help news publishers stand out from the crowd.

New metrics will now be available for measuring video engagement on Facebook through the page insights section of Facebook. The new updates will let page owners track views of videos on a more granular level with metrics such as 10 Second Views showing how many times videos were viewed for at least 10 seconds. The new metrics will also show how many people viewed videos with the sound on or off. These updates were rolled out on the 18th so should now be available to all advertisers. 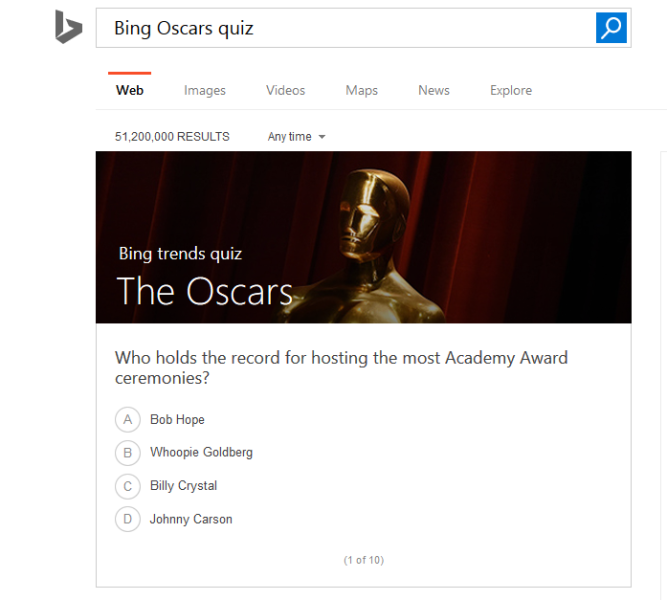 Bing has added a fun feature to its search engine for when users do a search for “Academy Awards” on the Bing search engine. A feature box takes up the top portion of the screen and shows: Nominees and predictions, past highlights, red carpet rewind, best picture winner, an Oscars quiz as well as a printable Ballot pdf. This fun feature will be updated in the lead-up to the big night and will also feature highlights and winners on the night.